For our last show of the year we brought you some music that we either haven't played or haven't played much. In some cases we just found it for the first time. Of note was three tracks we played from Marti's brand new acquisition -- a box set of music from the movies of Roy Rogers and Dale Evans.

We finished with a good dose of classic country music.

Thanks for listening. We hope you tune in again in 2009.

Posted by Jim Beaver at 1:43 PM No comments:

This was our Christmas show for the year, and it came after we had a week off for a sports preemption.

The weather fit the mood as it was snowing like crazy, so Marti did as Marti does and stayed home ("I'm not going out in that mess. You can go out in it if you want to."), so we had Marti join the show by telephone a couple of times.

Since we think it is a good thing to be in good humor for the holidays, we augmented our take on old and new Christmas songs with some classic novelty songs. We hope you smiled as you recalled (or heard for the first time) some of these gems (or whatever they are).

The following four tracks are from "Blue Ridge Mountain Holiday - The Breaking Up Christmas Story" on the County label, released in 1997:

Posted by Jim Beaver at 1:31 PM No comments:

Sometimes it is hard for us to pick a song from an artist because there are so many interesting songs to choose from.

We made that task a little easier for this show by playing two songs from each artist. Of course that made us want to play three or four or ten more, but what the heck...

The only exception to our two-fer policy on this show was our Golden Gate Quartet opener. We had a request for a Mississippi John Hurt number, so we fulfilled the request and then played a second John Hurt song at the end to make that a two-fer, too!

We hope this was as much fun for you as it was for us.

Mayberry Corner Trivia: Where did Barney stay on his visits to ? Answer: The YMCA

We have either recorded or come across lots of interesting material about early 20th century American music in the course of our musical lives (and this radio show), so we thought we would highlight some of the more interesting material on this program. That's why we call it "Live Stuff."


Robert L. Harmon, Sr. (Marti's Dad) told us about early radio and early music, including The Briarhoppers, Mainer's Mountaineers, and The Carter Family (interviewed in 1994)

The following songs were from a 1941 Carter Family border radio transcription and are from the box set “Early Country Radio” on the JSP label:

J. E. Mainer, Jr. told us about the history of his family in music (interviewed in 2006)

Mayberry Corner Trivia: Who hit the baseball through the window of the haunted house? Answer: Opie

The following Hank Williams recordings are from his 1951 “Mother’s Best” radio show:

David Peterson performed this song solo -- just he and his guitar -- live in the WHUS Studio, November 26, 2006

It's no secret that Marti loves Western music (and yes, there is a difference between "country" and "Western.")

This show was Marti's brainchild and she put a string of cowboy songs, western swing, and Western songs together for a unique cowboy and western experience.

We also paid tribute to some birthdays (listener Meg's was the day of broadcast, Marti's was the next day) and anniversaries (same listener Meg and her husband Jack was the same day (!) and my parents' was the same day, too.) We played the "Happy Anniversary" song from The Flintstones TV show.

We lost a bit of a couple of songs when we had a brief power surge in Storrs that knocked us off the air for a couple of minutes, but we hope you enjoyed the show in spite of that.

Posted by Jim Beaver at 7:51 PM No comments: 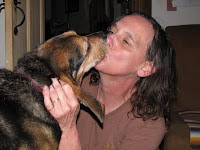