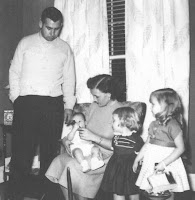 We had another sports-shortened show -- only 15 minutes because the UCONN women's soccer game went into double overtime -- but we squeezed in a few songs, including a 1962 Kenny Roberts-Elton Britt duet on WWVA, before our birthday tribute to Jim's dad who celebrates on October 27th.

Jim's dad and mom are in the photo with Red Rooster Party host Jim Jr. in his mom's lap. Two cousins are looking on.

You can hear it again at this link --> listen 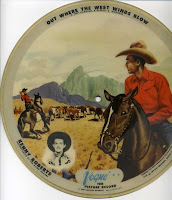 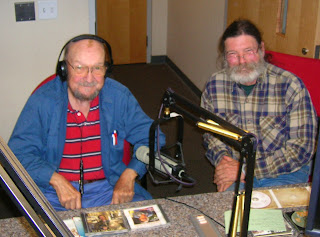 We had two outstanding guest DJs picking the music for this show: Earl Dunton from Willimantic (left in the picture) and Jeff Perkins from Canterbury (on the right). They selected the "guest DJ" premium during the WHUS Radiothon back in April, and finally got the opportunity to do their thing on this show.

What a show it was! The guys brought some excellent music to RRP that covered everything from classic country to modern retro-folk.

We liked what they did so much that we may just have them back sometime in the future.

For the playlist below, Earl's selections are in red, and Jeff's in blue.

Posted by Jim Beaver at 4:12 PM No comments:

We were preempted again as seems to be the case nearly every week during UCONN soccer season, but we managed to slip in an hour's worth of RRP.

We also debuted a recently-released CD from the Yazoo label of children's songs from the early 20th century, and we finished with some good ole early and classic country, including an earlier 1935 version of "You're Bound To Look Like A Monkey" from Milton Brown (dedicated to the WHUS sports crew, of course) to augment the 1952 Hank Penny version we played two weeks earlier, and squeezed in some Delmore Brothers tunes and a great country song from RRP friend Kenny Roberts.

Tune in next week when Jeff and Earl, two great listeners, will be picking the tunes and shooting the bull.

Posted by Jim Beaver at 7:27 PM No comments: