Marti was back on the air today after being away two weeks with students in Costa Rica, so we put her to work with a big Marti's Bunkhouse western set.

We had a good number of requests which included Roscoe Holcomb, Charlie Poole, Lee Moore, and a version of I'll Fly Away with Don Reno and Benny Martin.

Join us next Sunday 2-4pm ET for Red Rooster Party!

Posted by Jim Beaver at 4:01 PM No comments:

We learned much about early New England bluegrass and country music from Gordon Pike and Darlene Champagne during the second half of the show.
Gordon is the son of Earl Pike -- one of the Pike Brothers, Earl and Fred, whose band the Pine Hill Ranchers included many of the Pike family members including Gordon on drums, and Gordon's sister Earlene on vocals.  Earlene died in 1971 at 19 from cancer bringing the end of the family band.  Fred went on to Maine to create the Kennebec Valley Boys with Sam Tidwell.


We will probably replay this interview in the fall on Bluegrass Cafe.

Thanks for listening.  Marti will be back next Sunday.

Interview with Gordon Pike and Darlene Champagne, including the following songs:

Posted by Jim Beaver at 6:05 PM No comments:

We also had a recording of Jim’s dad from the same year, but because of technical difficulties with the recording, we were not able to air that interview segment.  We will play Jim's dad on a future show.
When we produced Red Rooster Party on its first three-year run, we incorporated at various times a Mayberry Corner Trivia question, and sometimes a Mayberry recipe.  This 2007 show had both of those features.

We appreciate all the calls from listeners.  You all are great!


Interview segments in blue.  Songs not aired on the original 2007 show in red.

Marti and I were back after suffering sports preemptions for the past two weeks.  It appears we will have about two months before that possibility returns.

Today's show featured several topics, the first being horses.  We put together about a half-hour of songs about horses, horse racing, horses as scenery for other events, and even finished with a mule.  Later on Marti continued the horse theme for most of her western segment, "Marti's Bunkhouse."

We played a 1944 radio transcription of Charlie Monroe & The Kentucky Pardners from Winston Salem, North Carolina.  They packed a lot of music into those 15-20 minute shows along with the requisite advertisements.  In Charlie's case, the sponser was Man-O-Ree, a type of patent laxative.  "Man-O-Ree is compounded of only the best roots, herbs, and other ingredients by a registered pharmacist." 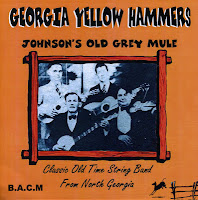 We also played a set of children's songs from way back, inspired by my acquisition of most of the recorded works of the Georgia Yellow Hammers -- string band contemporaries of The Skillet Lickers.  Not only did they record one of the first versions of Johnson's Old Grey Mule which appears to have been the source for the definitive version by J.E. Mainer, but they also recorded a great children's song about doodle bugs (ant lion larvae) that inspired the set.

Other notable artists on this show included:


We hope you are enjoying the return of Red Rooster Party.  If there is some old music you would like to hear, please let us know.  You can either respond in the comments of this blog, or send an e-mail to redroosterparty (at) gmail.com

You can also "friend" us on Facebook at https://www.facebook.com/redroosterparty

We hope you can join us next Sunday 2-4pm ET.