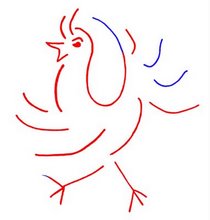 It has been brewing a long time, but after being off the WHUS schedule since February 2009, Red Rooster Party returned today for the first show in the Summer 2013 WHUS schedule.

Marti and I intend to produce the show for the summer only, and perhaps make it an annual summer thing.  It is too much for us to do it year-round, but with this plan we should be able to keep the program going for a while.

As part of the adjustment necessary for Red Rooster Party's return, I am retreating from the regular rotation on Bluegrass Cafe.  Amy Orlomoski will continue to bring great bluegrass to Southern New England, and I will make occasional fill-in appearances when Amy is away.  Today was the first such fill-in, which made a five-hour radio day for me. 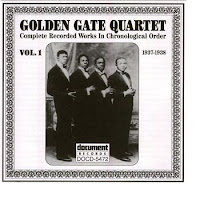 We began the show today with our classic introduction which was taken from a 1994 interview with Marti's Aunt Hattie Dalton who was in her 90s at the time.  Hattie died in 2004 at the age of 100.  Fred Cockerham and Tommy Jarrell provided the background for the introduction with "Breaking Up Christmas."  And of course we followed with our traditional song from the Golden Gate Jubilee Quartet, just as before.

Today's show did not have a theme as many of our previous shows did, but we instead played a cross-section of music typical for the show which included some of the earliest recordings that could be called "country."  Marti introduced a regular feature called "Marti's Bunkhouse" which is about a half-hour of cowboy and western music which happens to be Marti's favorite.

We also played some post WW2 music from the period when country music was catching on in a commercially-successful way.

We hope you enjoyed the return of Red Rooster Party, and will join us again next Sunday at 2pm ET for another journey in our musical time machine.

Red Rooster Party is Back!

Red Rooster Party is returning to the WHUS airwaves beginning Sunday, May 19, and every Sunday through the summer schedule (barring sports preemptions) from 2 pm to 4 pm ET.

It is at 91.7 FM in Eastern Connecticut and surrounding areas, and at http://whus.org/listen-now everywhere else.

If you like or want to learn more about American roots of country, folk, string band, and bluegrass music from the 1920s through the 1950s, this will be the place to be.

Check us out, and feel free to join our Facebook page:  https://www.facebook.com/redroosterparty